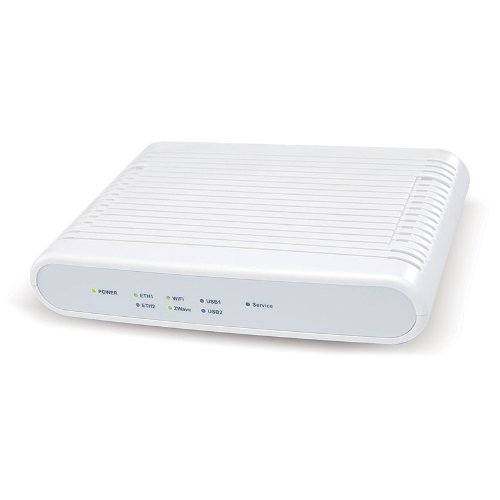 What an amazing product! The Mi Casa Verde Vera 2 from Mi Casa Verde is, as advertised, simple but sophisticated. After hearing dated horror stories of X-10, I never imagined just how simple it would be to create a home automation network until I got my hands on the Vera 2. Within an hour, I created my first Z-wave network, three HomeManageable Lamp Dimming modules controlled by the Vera 2, accessible from anywhere via IPhone, IPad, and computer. It is immediately evident to me that the Vera 2, using Z-wave technology, has the capability of bringing home automation to the masses. The device is quite easy to set up, which is great, but the thing that I like most about the Vera 2 is the flexibility of the device. There is very little that this device is incapable of performing. If the data can travel through Z-Wave bandwidth, the Vera can handle it. Oh, and you can even integrate X-10 and INSTEON devices into your network (with the additional purchase of a USB device, which runs ~$80), as well as IP cameras. Moreover, anything that you cannot do through Veras GUI, you can probably code in Luup, Lua code that very easily speaks with the Vera 2 and your Z-Wave devices. One of the common complaints I heard about the Vera was that it couldn’t process  commands, only OR? This is just isn’t true, with a few lines of Luup. The Vera 2 really can do almost anything you can imagine within the framework of Z-Wave’s somewhat limited bandwidth.

The device is not without faults, however. In particular, I found that the attempt to make the setup more user friendly backfired, complicating setup for the average user. My documentation suggested going to findvera.com, and this simply did not work. Also, the act of adding and removing devices can be described as clumsy at best. Last, I do wish that Luup coding wasn’t as necessary as it is with the Vera. Things like the command are pretty simple to include in the device. It’s pretty odd to exclude it. But more one these points later. My complaints are minor and are overwhelmed by my exuberance for the product.

The Vera 2 looks a lot like a two port Ethernet switch. It’s sort of a shame that the appearance of the box is so drab, given the amazing capabilities held within the metal walls. As far as I can tell, the Vera 2 is a WiFi router with Z-Wave capabilities. There is a physical button for including and excluding modules, as well as two USB ports and a couple LED status lights. It’s easy enough. The thing that really distinguishes the Vera 2 is the software. Installed on the device is a customized version of OpenWrt, a GNU/Linux platform for embedded devices. I’m not nearly sophisticated enough to know much about OpenWrt, but I do know that this software gives you a ton of flexibility, turning what seems like a simple router into a server. This permits so many capabilities from storing and writing files on the Vera 2 to secure, remote access. The most important and impressive capability, in my opinion, is Luup (Lua-UPnP), which easily allows the user to add code to scenes, creating endless possibilities. Imagine, for example that you want to create a scene where you wish to open your Z-wave compatible shades if it is day time and it is sunny outside. You can easily do this with a few lines of codes, creating a timer scene and then adding a few lines of Lua code which checks the weather conditions (a plug-in) and opens the shades if it is sunny and the shades are closed. Amazing right?

The GUI on the Vera 2, UI4, is attractive and intuitive. The first page that you are brought to is the setup wizard screen, a 3-step process of adding devices, creating scenes and adding notifications. Although this wizard makes setup simple, I think it takes a lot of control out of the process. For example, I couldn’t figure out how to add and manage rooms. I feel like this should be an interim step between adding devices and adding scenes. Honestly, I tried to use the wizard and found it frustrating. I recommend clicking the Dashboard button on the top right and doing everything from there.

I exclusively use the Dashboard to manage even my fledgling network. This screen is also very easy to use, although it takes a little getting used to. For example, to assign device to a room, you have to first create the rooms, either by clicking the âManage Roomâ?icon or by creating it in the Wizard. Then, you have to click on the wrench for the device that you want to assign to the room, go to the Advanced tab and assign the device to a room from there. Another example is renaming devices. To rename a device, you click on the wrench and then double click the generated name on the device at the top of the window and change it from there. It’s not exactly intuitive, but it’s not too complicated once youâre used to the system. Despite a GUI that could use some refinement, the Dashboard screen is powerful. Click around on it and you’ll quickly get the hang of it pretty quickly. You can set up devices and scenes fairly quickly. For more complex operations, like setting parameters and coding, you will certainly have to reference the Wiki page for some help. Also, the Mi Casa Verde forum is amazing for questions with many incredibly experienced members willing to help newcomers. It is best (and generally considerate) to thoroughly search the forum before asking a question, as many issues have already been addressed.

It’s a little hard for me to give a thorough opinion on the device operationally at this time, given the fact that I only have three lamp modules attached. I can say that I have not had a single issue so far with controlling any of the lamp modules or any scenes. The Vera 2 works very quickly, with only a very, very slight delay to a regular light switch. I can imagine this becoming slightly worse as my network expands and the signals have to travel further, but really this is just speculation right now. I have tried to spread my nodes throughout the house and I really have not witnessed a lag worth noting. I look forward to adding more devices to my network in the very near future and expanding on this review.

I have one small complaint regarding operation (that probably should’ve been addressed in the hardware section). I really wish the feedback mechanism for adding and deleting devices was more than blinking lights. A small LCD or E Ink display would have greatly simplified the adding and deleting of devices. I found it slightly difficult to rely on blinking lights as my indicators and had some trouble adding and removing devices from the Vera 2. It’s not awful, but it could be better.

Overall, my Vera 2 is functioning impeccably.

The Vera 2 by Mi Casa Verde is an incredible piece of hardware for users of every level. Although it is not foolproof, given the complexity of its operation, it really is almost too good to be true. I highly recommend this device for Z-wave users of any level from noobies to home automation veterans, and I look forward to continuing to add devices and more complexity to the Vera 2. I’m confident it will continue to exceed my expectations.